When we lived and worked in Japan we found ways to cut corners, the same as the Japanese. Many of these were tips on how to save money, how and where to buy groceries, ways of keeping down travel costs. Even though Japan was in the midst of its second decade of deflation, it was still a much more expensive place to live than Australia. Most of the advice came from helpful foreigners, former teachers and Japanese students.

One typical example was train travel, which, while being magnificent, was often quite pricey. We regularly went to Osaka on school business or shopping and Sanda had a direct JR line to Umeda. It was fast but more expensive if the we took it the whole way. But by changing at Takarazuka, we could hop onto the adjacent Hankyu line for the rest of the journey. This saved us a couple of hundred yen each, money that could be spent on lunch or sightseeing. The bonus was that the Hankyu train company was my favourite by a long chalk, their superb carriages in a burgundy livery instantly recognisable. If it was possible I would take Hankyu everywhere.

By contrast, Sanda's other train company, Shintestsu, which ran to Kobe, was expensive. The little spur line to Woody Town was even more so, relative to the distance. I tended to walk between stations rather than pay up though I caught the train a couple of time because, well, I love trains.

If you go to Japan, catch a train. You won't be disappointed. 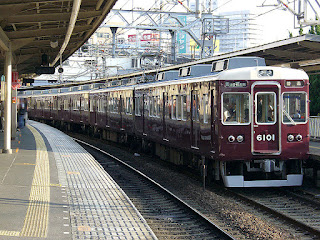 Next Saturday there is a Federal Election in Australia. God willing, I will travel to Canberra the day before polling day to visit my long-time friend John, now a lecturer at the University Of Canberra. We will spend the better part of 48 hours discussing politics (not everyone's cup of tea, I realise) and watching as the results come in on Saturday night. I hope that this time, there is a just result. I am sorely tired of the conservatives.

It is by the grace of God that I can still contemplate such journeys. It is frankly a wonder that I am so happily married, have my own house (shambolic as it is!), have good friends and the chance to do interesting volunteer work. My superannuation covers pretty much all living costs. So there are many blessings in my life and it can only be through grace that I have made it so far.

I have not come through unscathed - life conjures many disappointments and afflictions. For forty years I went my own way and paid the price for it. On reflection, I can see many occasions when a higher price should have been paid and a few when my very existence was in question.

But here I am ready to try again. Even to say that shows that a greater love is at work than I can possibly describe.

From out of all the rainy, cold weather that we have had in spades in recent months - wet that has left things mouldy and damp and without proper dryness - comes a warm, sunny May day. I thought my eyes were playing tricks when I saw the the temperature gauge was 23 degree C, well above the regular average for this time of year.

So out goes the washing - tops and bottoms that take an age to dry in wet weather, clothes jostling for a position on the too-full washing line, racks with underwear and socks and face washers dangling by a peg.

I must be s simple soul because I find it a glorious sight.

The May Tournament of Grand Sumo has begun at Tokyo's Kokugikan. With worries about Covid receding (whether we like it or not), the legal crowd capacity is up to about 80%. The added atmosphere obviously benefits some wrestlers more than others and a few rikishi make the most of it with prefight habits, such as throwing a huge handful of salt (I'm looking at you Terutsuyoshi) or beating their chests or bodies in an aggressive manner. Hakuho, the greatest ever sumo champion, had a habit of turning in a menacing fashion before returning to his side of the dohyo. He left no-one in doubt that he meant business.

At Day 5 the field is looking rather topsy-turvy. Rank and filers (maegashira)  occupy the top three spots with Terunofuji breathing down their necks. The troika of ozeki have thus far been underperforming and will need to lift their games, especially the slow-starting Shodai.

I think it will be an exciting tourney with the Emperor's Cup up for grabs. A number of wrestlers could be in the hunt for the prized trophy. The screenshot below is from Day 3 and features the mysterious lady in yellow. 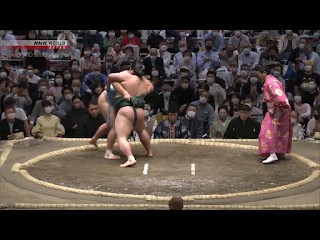 I first bought my Gaggia Classic Espresso machine back in 2009 in the hope of making good coffee and saving money. Buying a cup of coffee every day and being vulnerable to the other delicious fare on display in a typical cafe can run up a lot over a year. So buying the machine and a decent coffee grinder was an investment in the long term.

That is exactly how its worked out. I do make good coffee and there has been more in my bank account each month as a result. The only problem with the Gaggia is that its boiler tends to rust out every four years or so and needs replacement, something that is not cheap. You can do the maths but 13 years of ownership means that I am about to need a third replacement boiler.

And so it is. Hot water now comes from the group head extremely slowly. In fact its just a drip or two, impossible for the making of a cuppa. So off to the repairman at Seven Hills! 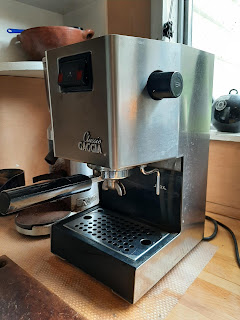 Today being so fair after a cold night, I took myself out for a ride between the villages. At one point, not far from Woodford Station, I could see vastly across the undulating hills of the valley to the north. Lines from Hopkins came unbidden into my head and stayed with me as I rode.

"I caught this morning's morning minion, king-
dom of daylights dauphin, dapple dawn-drawn falcon, in his riding
Of the rolling underneath him steady air, and striding....."
these, from the opening verse of "The Windhover."
Hopkins was a poet who celebrated his faith (the above poem has a dedication 'To Christ Our Lord') and his poems tumble richly from the pen, words almost tripping over each other, like dominoes set to fall, but somehow just hanging on.
It is hard not to sense God in nature unless you are hardened against such a sentiment, which is a shame. I know that this is not a popular view. When I say sense, it is more like a whisper, which permeates both the head and the heart.
Hopkin's swung, 'from joy's height' (Flynn), something that is all but forgotten in the modern world.
Posted by David at 1:05 PM No comments:

For every negative thought or circumstance that we dwell upon, there are a dozen or more positive ones that we simply fail to see. Unless we pause to look.

Shortly after I wrote the earlier post, the sky became the deepest blue and a warm autumn sun settled upon the wet earth and threw the turning leaves into glorious relief.

My bike purred along and suddenly, all was well with the world.

Email ThisBlogThis!Share to TwitterShare to FacebookShare to Pinterest
An old folk/rock song from the 1960's by Barry McGuire goes,
"But you tell me
Over and over and over again, my friend
How you don't believe
We're on the eve of destruction"
This refrain follows verses in which the singer laments the frail and parlous state of the world, the threat of nuclear war being but one option amongst a dismal list of human failings. The 1960's was a time of social and political upheaval, of deep questioning about established truths. As now the environment weighed heavily in the debate, though ours seems a far vaster existential threat.
Today, nuclear weapons have not gone away and the Russian dictator often talks airily about their use, defying past practises. I have talked before about the subversion of truth, these being factually established truths, and the erosion of trust in key institutions. Ditto the rise of an all-consuming cynicism and a growing intolerance of other points of view. There is an extremism afoot across either end of the political spectrum.
Well, I could go on and on. By way of balance, I could also point to the many positive achievements in the sciences and medicine and education, of the alleviation of poverty in many countries, of people striving everywhere to make a difference.
Still, when I hear the question arise of what life will be like at the end of this century, it strikes me that we will be lucky to get out of these next half dozen decades alive  at all. If a great filter is ahead of us, woe betide!
Posted by David at 2:10 PM No comments:

Frankly, I have been amazed, and not a little concerned, at the manner in which Covid safety rules have been relaxed. In fact, they have collapsed. Governments in this country have fallen over themselves to undo regulations and most of the citizenry have gleefully abandoned masks and social distancing.

As a mask wearer in most situations, I think I am starting to stand out a little. I think that there is quite a bit of projection going on too, as I sometimes catch people giving me a quick glance. Never mind that I have the medical establishment on my side. I am not a goody two-shoes, just residually wary of a disease that shut the planet down, caused widespread panic, a complete change of lifestyle, whilst sickening and killing millions of people.

Kardashev 1 for human civilisation one day? I doubt it.

David
I am a former school teacher. A notable experience was three years living and working in Japan. A father, counsellor by training and volunteer worker. Married to Ann. Children - Tom and JJ.